Seven of today’s most exciting young poets gather at a historic literary salon in New York’s Hudson Valley that once nurtured Langston Hughes and Henry David Thoreau, recently revived as a contemporary guesthouse 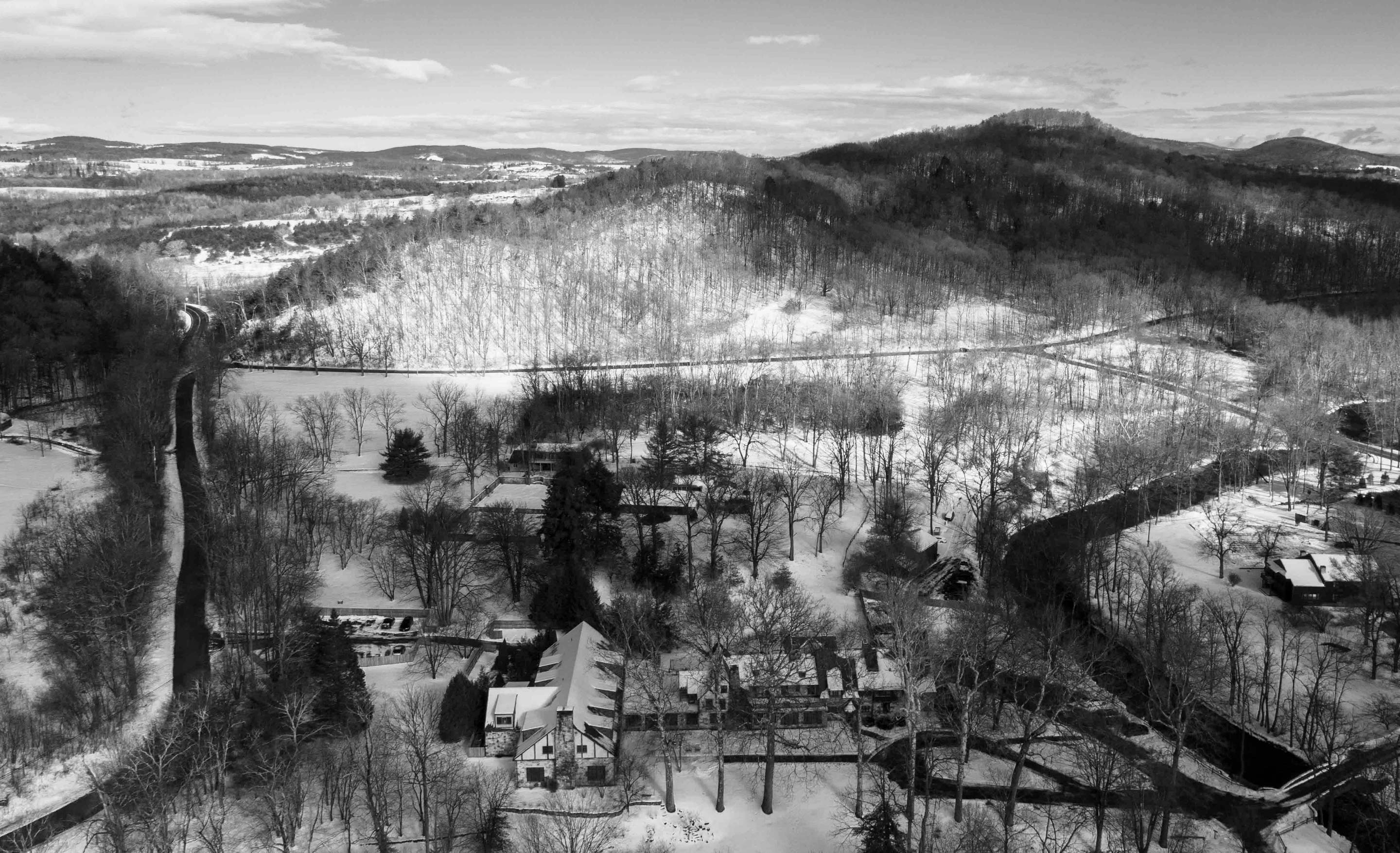 What does it mean to be a poet in 2019? How do identity, environment and sense of place figure in artistic creation? What constitutes a creative community when everyone is online? These were just a few of the topics on the table at Further Troutbeck: The Poet Society, which brought a diverse group of young, talented poets to Troutbeck, a reactivated manor house and boutique accommodation in the Hudson River Valley that once served as an important creative retreat and literary salon, welcoming Mark Twain, Langston Hughes, Ralph Waldo Emerson and Henry David Thoreau, among others.

Both a writers’ retreat and a creative summit of sorts, Further Troutbeck was the inaugural gathering of this year’s 7-destination Further lineup, which will journey from the shores of Ibiza to Mykonos, from Tbilisi, Georgia to Tokyo’s Shibuya neighborhood for a series of cross-disciplinary, temporal investigations tied to the specific culture and history of the destination. In the case of Further Troutbeck, this meant digging into the hotel’s past as an important creative salon and incubator of ideas.
‍

Located in the tiny town of Amenia in the bucolic Hudson River Valley, which runs north to south along the eastern edge of New York state, the property now known as Troutbeck was originally settled in the mid-18th century by the Benton family, whose cadre of friends included Henry David Thoreau, Ralph Waldo Emerson and numerous other prominent poets, naturalists, and artists of the era. In the early 20th century, it was purchased by Joel Spingarn, an influential educator, publisher and civil rights activist, and his wife, Amy.
‍

Considered one of the architects of the NAACP, i.e. the National Association for the Advancement of Colored People, Spingarn is credited with helping to transform the fledgling civil rights group into a massive advocacy organization known worldwide for its lobbying and litigation efforts on topics ranging from segregation and lynching to equal protections under the law. Central figures of the organization, like civil rights leader W. E. B. Du Bois and the great abolitionist muckraker Ida B. Wells, became frequent visitors to Troutbeck, introducing the Spingarns to Martin Luther King Jr. At the same time, Troutbeck became an important salon and stomping ground for the great 1920s-era intellectual, social, and artistic flowering known as the Harlem Renaissance. The movement’s arguably most important figure, the poet and essayist Langston Hughes, even published on Troutbeck Press, Spingarn’s small publishing house, along with Sinclair Lewis, Du Bois and, posthumously, Walt Whitman.
‍

This history laid the groundwork for Further Troutbeck, which took place over five days in February. The list of participating writers included some of the most exciting names in contemporary poetry, from Justin Phillip Reed, winner of the National Book Award in Poetry for his first collection, “Indecency” (Coffee House Press, 2018), to Hieu Minh Nguyen, whose two poetry collections deal with his identity as a queer Vietnamese-American born and raised in the American Midwest. Each morning the poets were delivered reprints to their rooms of the famous 1920s-era “Troutbeck Leaflets,” featuring works by various Troutbeck visitors from Langston Hughes to the Spingarns themselves. They were also granted access to the property’s extraordinary collection of literary artifacts.
‍

“We talked from Friday to Monday, interspersed with swimming and glorious food.”

“History feels so abstract until you touch a piece of paper that Langston Hughes once touched and you don’t want to wash your hand ever again,” said Safia Elhillo, a Sudanese-American poet whose award-winning first collection, “The January Children” (University of Nebraska Press, 2017), refers to the generation born in Sudan under British occupation, where children were all given the birth date January 1. “We think so often of these people, like names and brains and ideas and bodies of work,” she continued, “but the fact that he was a person with a body and a hand, writing and existing in a place that then somewhere down the line we also sit in. Somehow my mind is still a little bit blown.” One morning at Troutbeck, said Elhillo, she woke up with a fully composed poem in her head. “I'd slept for 10 hours and then I woke up with the poem, just wow, fully formed,” said Elhillo. “Which is not what writing is usually like for me.”
‍

The images and artifacts that decorate the walls of Troutbeck bear witness to several historical gatherings that took place at the property, including Kofi Annan’s negotiations of the Cyprus Peace Accord in 1997. But perhaps the most historic was the NAACP’s second Amenia Conference of 1933, held in the midst of the Great Depression and aimed at reinvigorating the organization by extending its focus from legal and political issues to economic concerns. The conference was captured for posterity by Du Bois in the October 1933 issue of “The Crisis” magazine. Alongside his depiction of the intellectual advancements of the conference, he invoked a simple description: “We talked from Friday to Monday, interspersed with swimming and glorious food.” “He sort of just distills the experience down to the hospitality… That has a lot of meaning tome personally in terms of this place,” said Anthony. “Somebody created a precedent for us, like this is how you are supposed to look after people, and good things will happen.”
‍

The passage holds particular meaning for Troutbeck’s current owners, Anthony Champalimaud, a Montreal-born artist and developer, and his wife, Charlie, who took over the property in 2016. “He sort of just distills the experience down to the hospitality… That has a lot of meaning tome personally in terms of this place,” said Anthony. “Somebody created a precedent for us, like this is how you are supposed to look after people, and good things will happen.”

“History feels so abstract until you touch a piece of paper that Langston Hughes once touched and you don’t want to wash your hand ever again.”

While in residence at Further Troutbeck, the poets divided their time between working—collaboratively or in solitude—and discussing various issues and questions facing the contemporary literary community. In the evenings they came together for dinner. “It's actually been a really generative time for me,” said Tiphanie Yanique, a novelist, poet and essayist whose evocative writing, often set in her native Virgin Islands, has drawn comparisons to Toni Morrison and Gabriel García Márquez. “I always need sunlight to write, and that has historically meant being home in the Virgin Islands and sitting on the beach and creating work there. So it's actually been quite freeing to see how productive I've been since I've been here, in part because I’m getting amazing sunlight streaming through my window upstairs.” At Further Troutbeck, said Yanique, she actually finished her next novel.
‍

“It's easy to forget that this is a hotel, because we have been introduced to it as sort of a vessel, and so we've come to use the vessel,” said Yesika Salgado, a Los Angeles-based Salvadoran poet and body positivity activist who has written two poetry collections, “Corazón”and “Tesoro” (Not a Cult) and the upcoming “Hermosa.” She continued: “When we were doing a meditation, we were all setting intentions and calling on people that we wanted to remind us of our intentions, and we called on our great grand parents or grandparents, and it's all people that come from other countries. And all of this traveling that they did to get us to this place, I don't think of it as a hotel at all.”
‍

“Anthony and I, we aren't like Joel and Amy Spingarn, who are poets and professors and have all these amazing stories,” said Charlie Champalimaud. “But we can try and open a house that feels like a house and that makes people feel welcome, and if they can be creative here and have really good conversations, then that's an amazing thing to be part of.”