Evolution of the Farm

A group of trailblazing farmers, chefs, writers, and entrepreneurs gather at a reactivated Ibiza farmstead for a two-day exploration of contemporary agriculture, the slow food movement, and how people across the globe are rethinking their relationship to food.

Ibiza may still be best known for beach tourism and wild parties, but among a subset of the small Balearic island’s farmers, chefs, foodies, and entrepreneurs, a revolution has been quietly taking place. Projects like Amorevore, a food and consciousness festival engaging with radical ideas around food production and consumption, and La Granja Ibiza, a 10-hectare farmstead reactivated as a trailblazing farm-to-table hospitality project, are helping to turn Ibiza into a hub for those rethinking our relationship with the food we eat.

This made it the ideal location for Further Ibiza: Evolution of the Farm, which addressed various questions around contemporary agriculture, the slow food movement, and sustainable modes of eating in a two-day gathering at La Granja in collaboration with the Ibiza Preservation Foundation and Sleeper Magazine. Residents included, among others, Greg Seider, a world-renowned mixologist known for his plant-based restorative elixirs infused with ingredients like CBD and ionic fulvic minerals, celebrated farmer and cookbook author Anne Sijmonsbergen, who turned her once-fallow Ibizan farm, Can Riero, into a lush agricultural plot that now supplies local organic produce to top restaurants and private chefs across Ibiza, Amorevore curator and influential environmental writer Rory Spowers, and Chris Sanderson, co-founder and CEO of the world-leading strategic foresight consultancy The Future Laboratory, who presented some of the organization’s latest findings on the future of the health and wellness industries.
‍

“What we've started to see at The Future Laboratory is very much this idea that the concern of the 21st-century consumer … is subtly but I think quite profoundly changing,” said Sanderson. People are moving toward a “more holistic understanding of self and position of self in regard to other people,” he added, which is leading to a reexamination of eating habits.
‍
In the midst of this reexamination, Amorevore began to cull together people at the vanguard of food and agricultural movements, like nutritionist Eve Kalinik; Justin Horn, chef of the world's first circular economy restaurant, Sativa; and the proprietors of Green & Black’s chocolate, the first product to be organic and fair trade. Launching in 2018 with an ambitious program of talks, music, film, art, and of course, gastronomy, Amorevore engages with radical ideas across the environmental, cultural, health and economic aspects of food production and consumption.

“I think the public conscience is waking up to the importance of nutrition and that connection between our health and the food we eat,” said Spowers, who shared with the other Further Ibiza residents some of the findings and projects of past Amorevore participants. “Now we need to establish the connection back to the soil and how food is produced,” he said, “because all of these issues are so fundamentally intertwined.”
‍

There were also workshops with La Granja’s master farmer, Andy Szymanowicz, an expert in biodynamic agriculture and lacto-fermentation, and the farmstead’s Patagonian kitchen master, José Catrimán. The two collaborate closely to bring La Granja’s crops to the plates of its guests, letting the farm itself dictate the ever-changing seasonal menu through a comprehensive, highly sustainable system resulting in virtually zero waste.
‍
“If you have a restaurant, you need to print a menu, and then you have to have a lot of produce in your restaurant,” explained Catrimán. “So you end up throwing away a lot. Here, if people ask for tomato in May, we say, ‘No, we don’t have tomato.’ It’s super ecological. If you check our rubbish, it’s only compost to feed the chickens. We take the skin of the lemon, dehydrate it to make oils—we use everything.” La Granja’s menu, said Catrimán, is generated by the farm itself. “Our recipes all come from the garden,” he said. “We’ll take a walk, and we’ll see, ‘Wow, it’s like 100 leeks.’ So we’re going to roast it, steam it. The garden is where we start the imagination.”
‍ 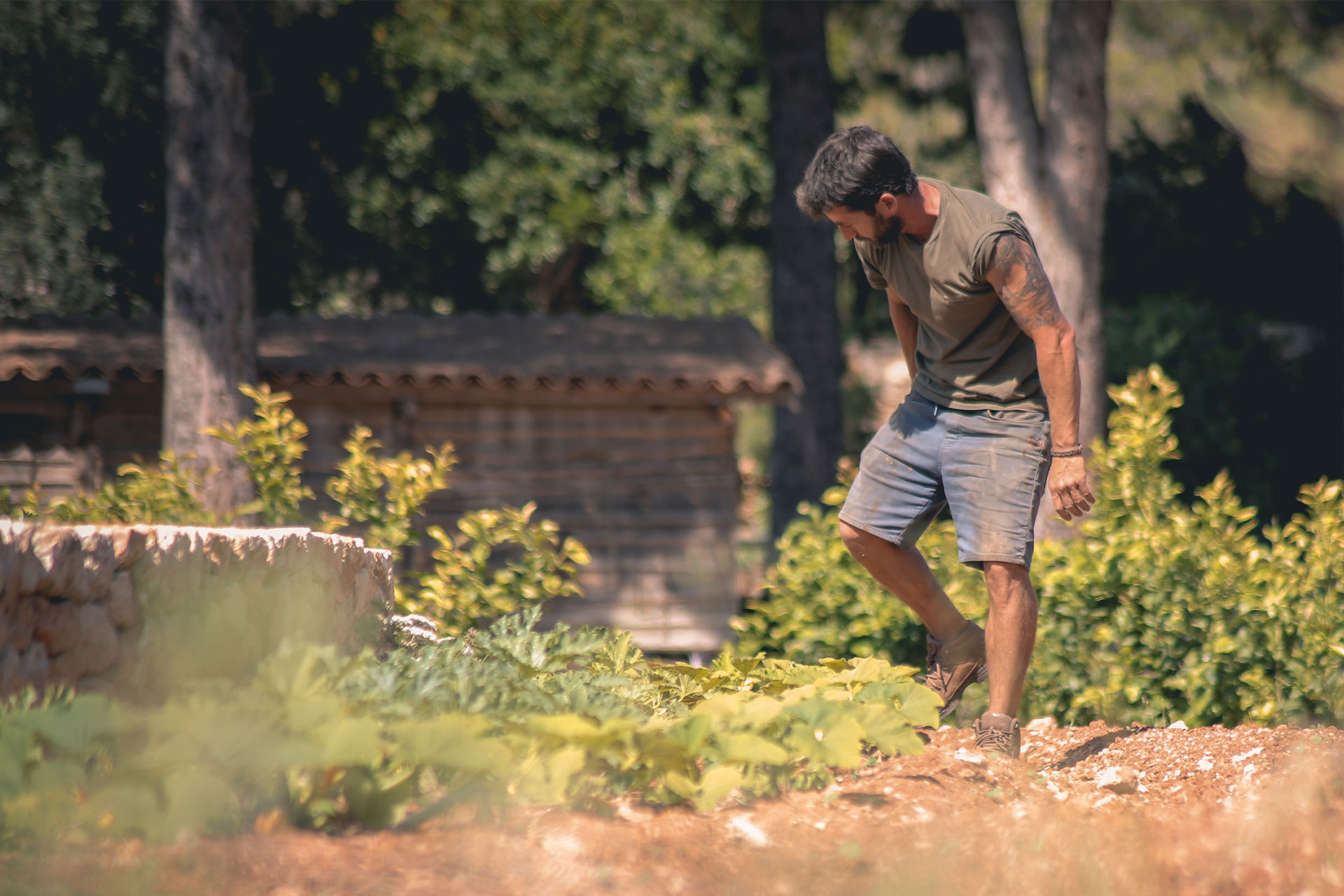 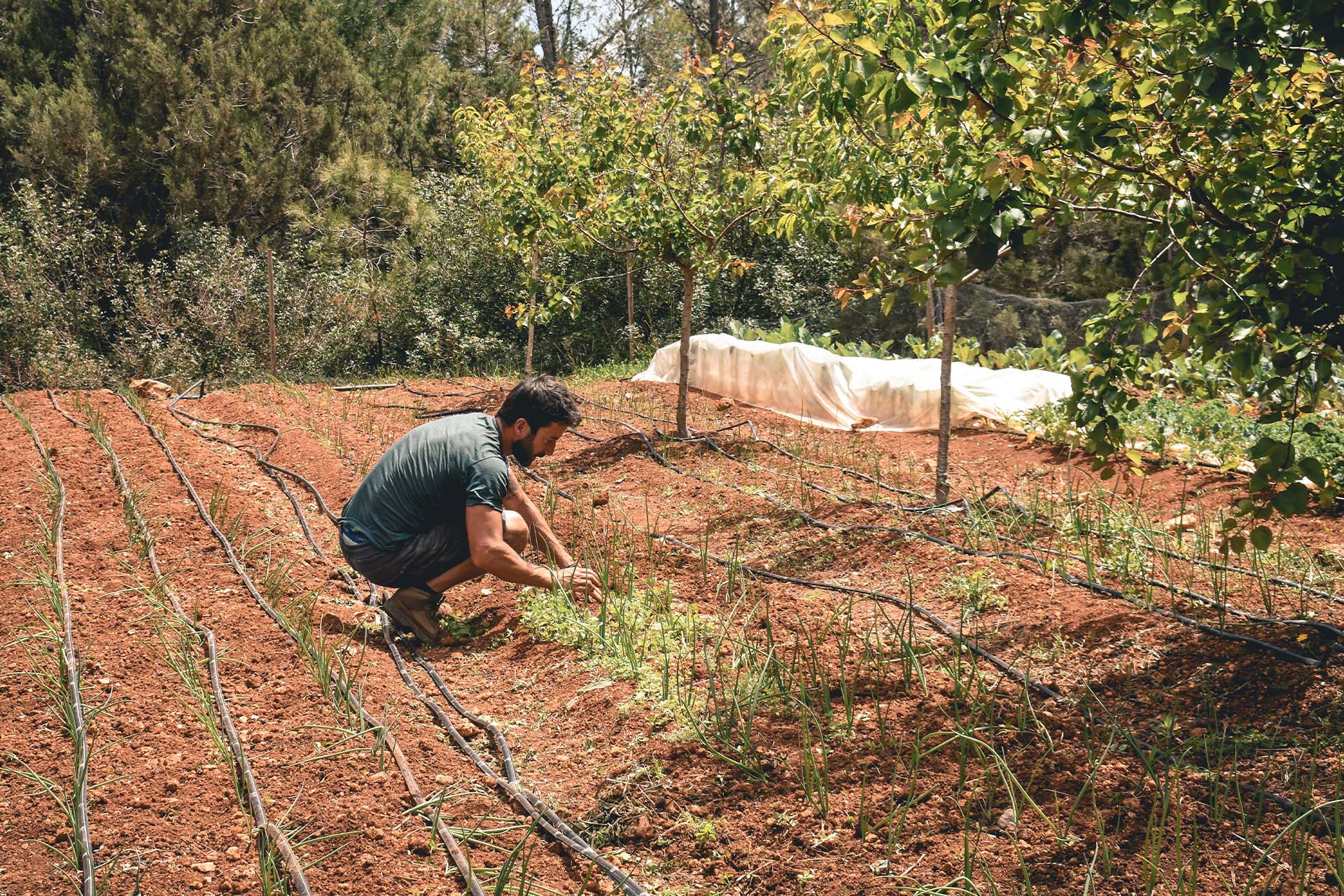 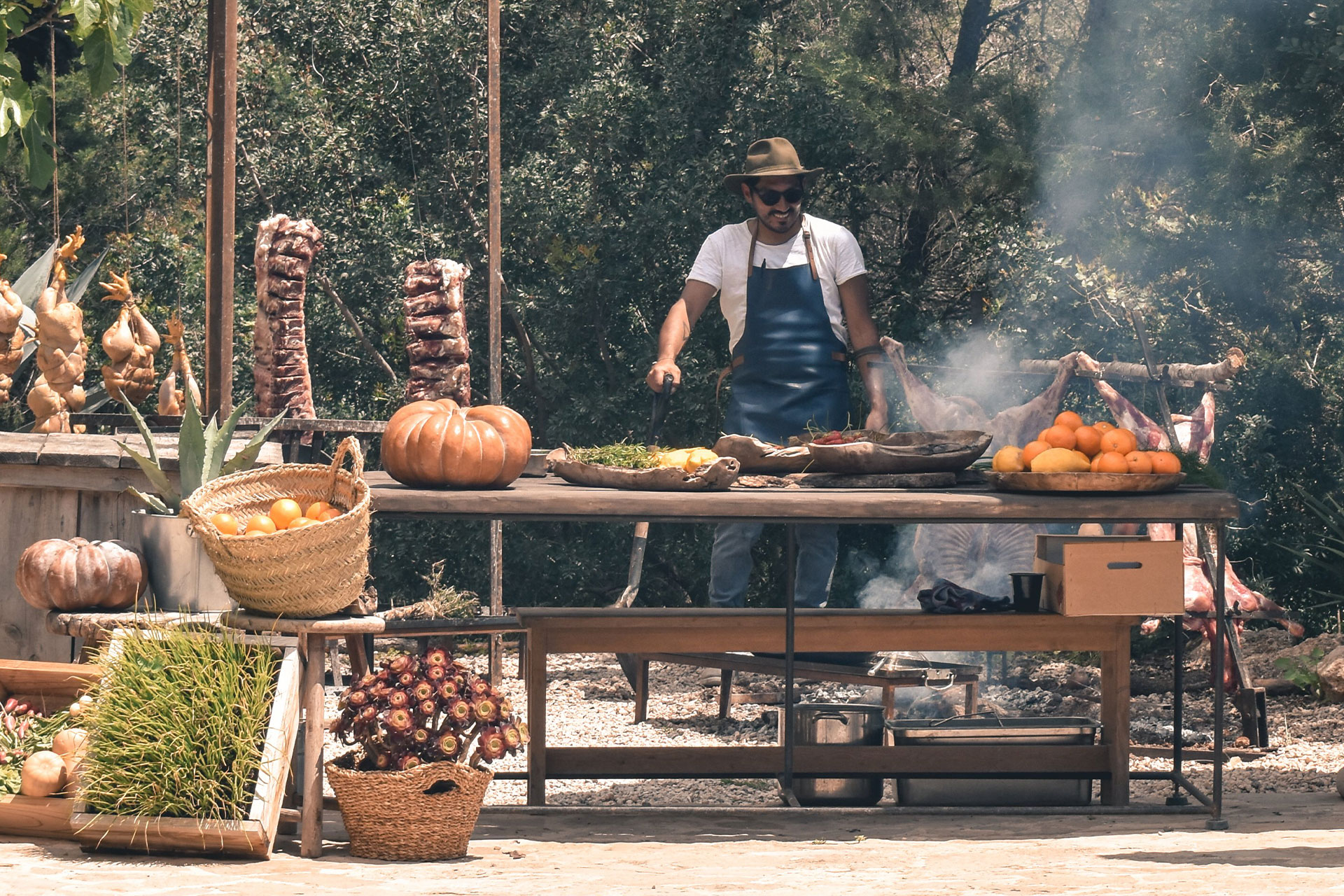 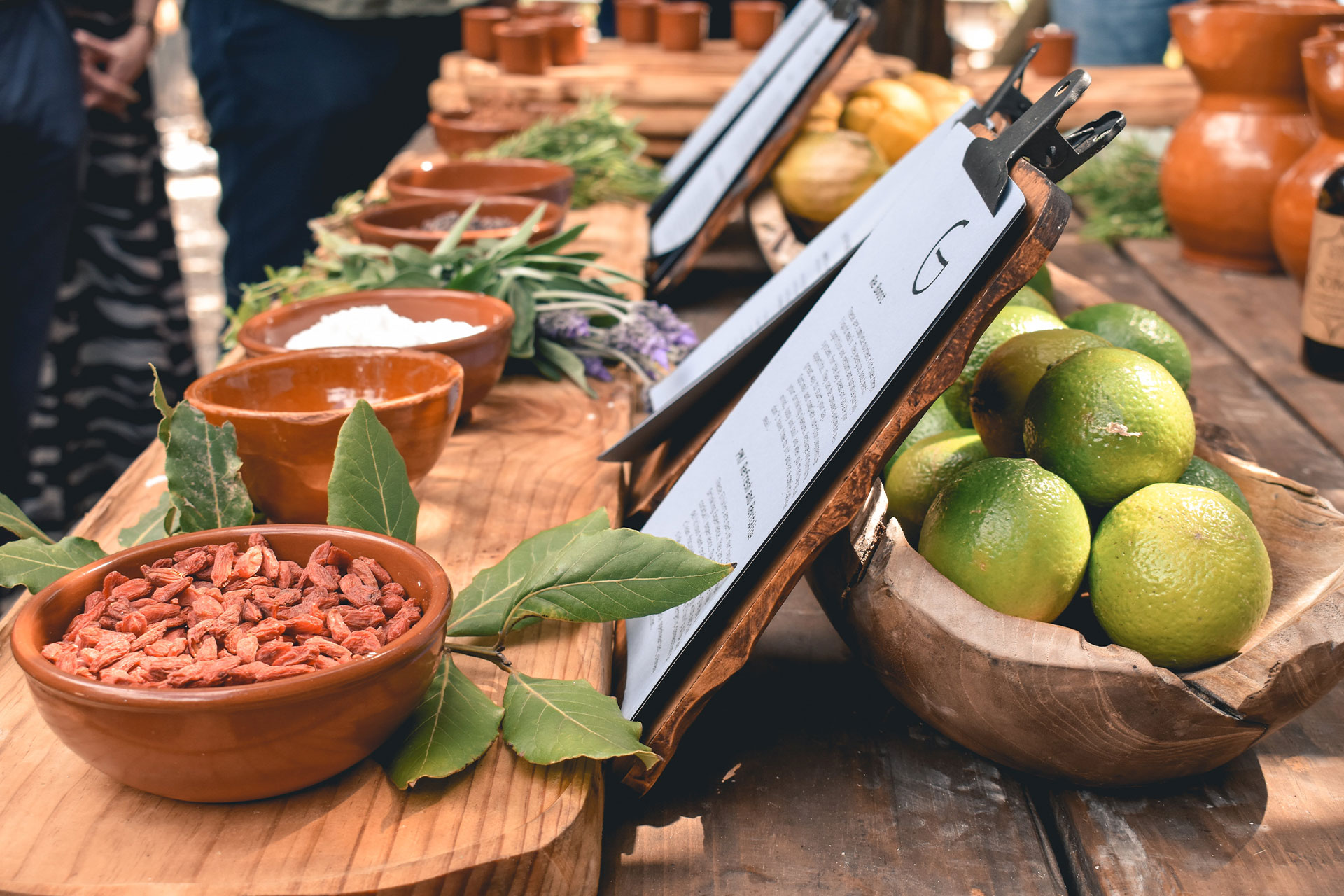 “The garden is where we start the imagination.”

And while Ibiza, with its abundant fertile land and 300 plus days of sunshine a year, may be particularly well disposed to a project like La Granja, the hope is that experiencing the farmstead will send ripples through the everyday lives of its visitors.
‍

“I hope our gardens can be a kind of inspiration for the guests,” said farmer Szymanowicz, “not like we're preaching, but more of an unexpected takeaway, from the hundreds of varieties we're growing, the old heirloom varieties, the care and love that we're putting into our plants, the connection between the chef and the farmer, how fresh the food that they are eating is, so that potentially when they go back home they might start asking questions about where and how their food is grown. They might start asking why food doesn't taste so good when it comes from a supermarket. Why does it taste better when it comes from the farmer’s market? They might start searching out more farm-to-table restaurants. It’s about starting the conversation.”
‍

This conversation is happening more and more, said Sanderson, not just about our eating habits but about our health and wellbeing more generally. This in turn, he said, is fundamentally altering the relationship between the traditionally separate fields of health and wellness. “Increasingly the two are actually sort of coming together,” said Sanderson. “If you think about the way our diet and food habits are changing, we are becoming more functional in the way that we often eat food or treat food. Technology is helping us to maybe monitor our stress or sleep patterns. So everything's becoming so much more holistic.”

Perhaps no one better embodies this holistic, health-meets-wellness zeitgeist more than Greg Seider, a mixologist and entrepreneur who made his name in New York’s cocktail scene at bellwethers like Minetta Tavern, The Standard Hotel, and The Summit Bar but ultimately found himself fed up with the status quo.
‍

“Owning bars and being in nightlife, I was really getting annoyed and disconnected watching people abuse alcohol,” said Seider. Yet he couldn’t deny the social advantages of drinking, so he went searching for a third way and eventually took a sharp turn into the verdant, uncharted jungle of plant-based restorative elixirs.

“Plant medicine actually creates a better blissful, cleaner energy and is better at relieving stress,” said Seider, who now creates concoctions packed with sustainably harvested plants, herbs, and naturally occurring active ingredients referred to as “adaptogens,” which he specially formulates for certain energy states, from mental clarity to “grounding” to“blissful energy.” The results are clear, said Seider, whose elixirs are in increasing demand at a range of bars and hospitality brands across the world. “I really witness and get feedback on how people are making more openhearted, sincere, long-lasting connections,” he said.
‍

Other residents included the Ibiza-based Kurdish Sufi musician Bahramji and the Turkish psych-house outfit Islandman, who played as the sun set in a dramatic cascade of light over the glorious tiered gardens of La Granja and the Mediterranean beyond. It was impossible not to think about the future prospects of all this natural beauty on Ibiza and elsewhere. The word, “sustainability,” seemed to sit at the edge of everyone’s thoughts.