On a windswept stretch of Texas desert re-envisioned as a minimalist art mecca, Further Marfa set out on an exploration of borderlands: between art and commerce, city and country, Mexico and red-state USA, somewhere and nowhere.

There’s no easy way to get to Marfa. The small West Texas town has no airport, so visitors from afar have to fly to the nearest big city, then drive at least three hours through the high plains of the Chihuahua Desert, passing towering rock faces and blanched fields as the horizon stretches out infinitely in all directions. The vast beauty and remoteness of this landscape is what drew people like the seminal minimalist artist Donald Judd, who came seeking refuge from the 1970s New York City art world and slowly scattered his sculptural works across the desert landscape—from the disused army base he filled with installations to the pastures that host his 15 giant concrete boxes. Judd helped over the following decades to transform Marfa into the singular creative haven it is today, where artists and outsiders come in search of the space, freedom, and energy of the high desert.

In this spirit, Further brought six Mexican and Mexico-based artists to Marfa to create a series of interactive, site-specific works in collaboration with Anónimo, a pioneering contemporary art platform that conceals authorship until a work of art is sold to free it from preconceptions about a work’s economic value. To mark the exhibition’s opening, a program of talks, performances, tours, conversations, and gatherings explored the topic of Borderlands—between art and commerce, city and country, Mexico and red-state USA, somewhere and nowhere.
‍
“Marfa has been on my radar for many reasons," said Anónimo’s founding director Alejandra Martínez. "Not just the whole art scene—​the place itself is wildly valuable and beautiful and completely surprising in so many ways, but it’s getting here that really makes you understand.”
‍

“The place itself is wildly valuable and beautiful and completely surprising in so many ways, but it’s getting here that really makes you understand.”

Martínez encouraged attendees coming from Mexico not just to fly to El Paso but to drive over the border from the Mexican city of Juarez. “I invited them to do the whole pilgrimage, ”said Martínez, “to get really sucked into this very powerful reality that is orbiting us, but never really touches us. And then to have that very dense energy with you and then start driving through the desert, and getting freer and freer, until at some point in the desert, it’s just you and it.”
‍

In curating the exhibition, Anónimo put out an open call for proposals that responded to the “sacred context” of Marfa, meaning not just the destination’s history and culture but the experience of being in the desert, exposed to the elements. The resulting exhibition showcased six different interpretations of prime elements and prime matter—textile, charcoal, wood, light, sound, and color—in the transitional hotel space of The Basic, a kind of “empty frame” concept inspired by the artistic approach of Marfa bellwether Robert Irwin. In accordance with the principles of Anónimo, the artists’ identities were not revealed until the exhibition opening. 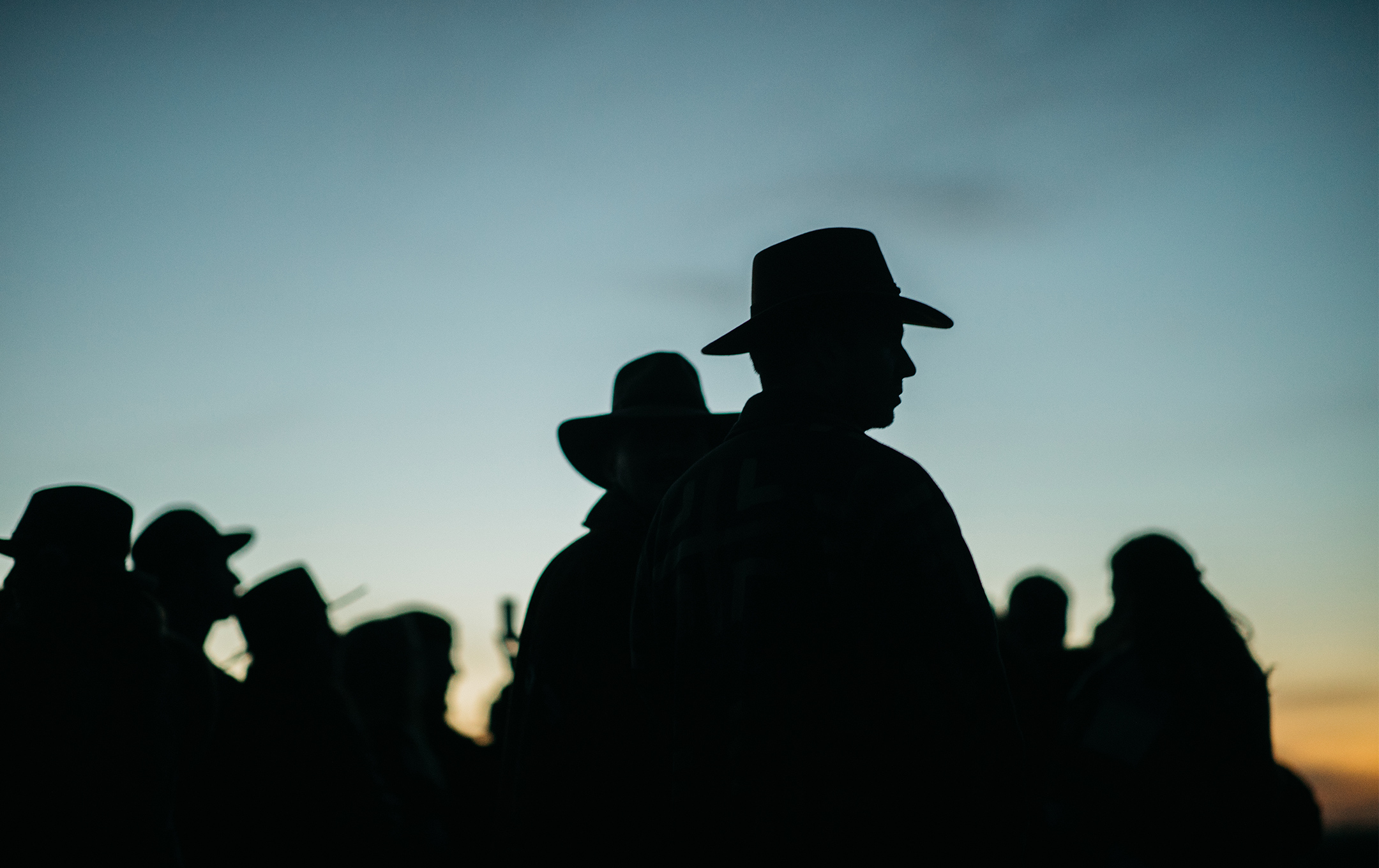 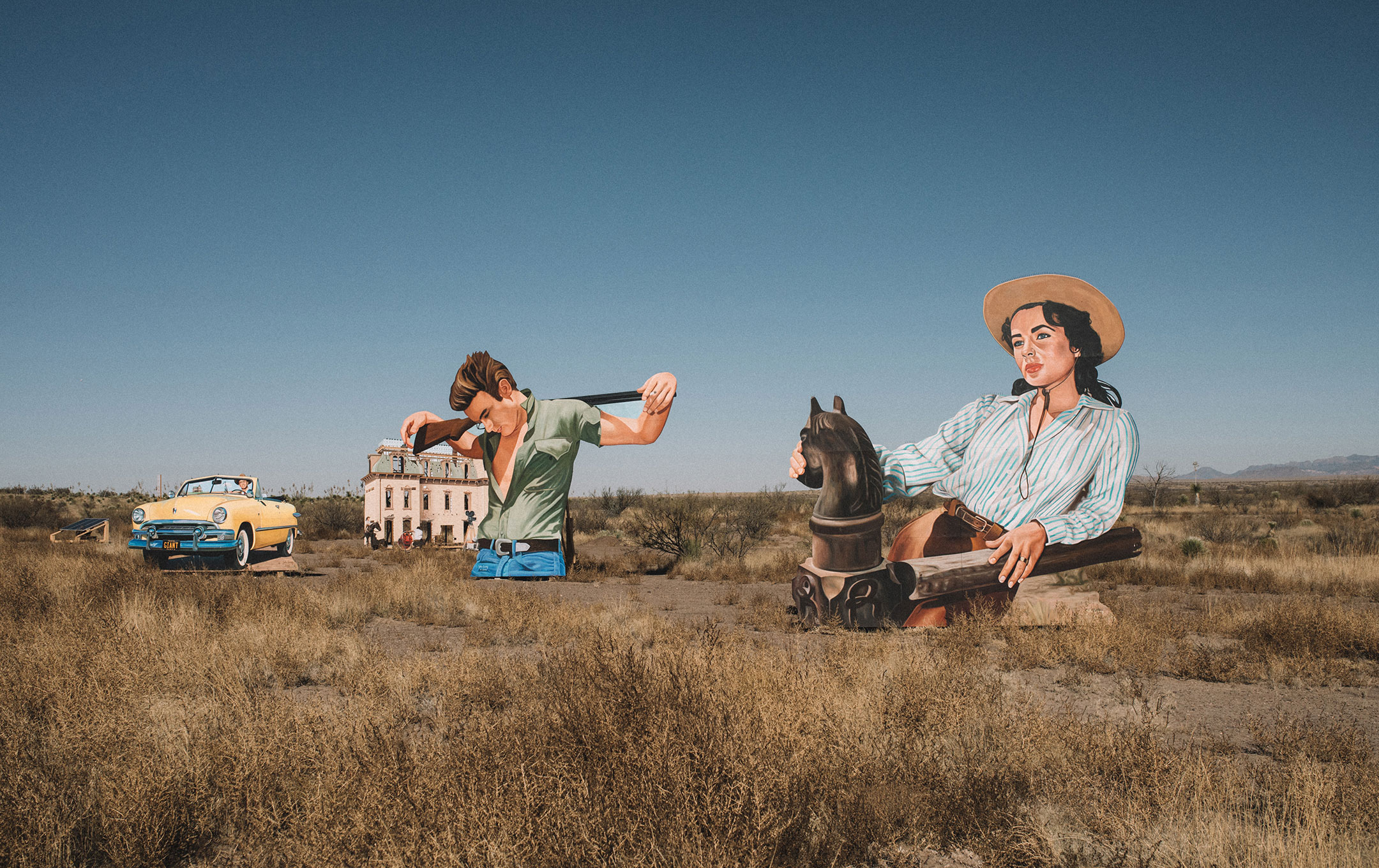 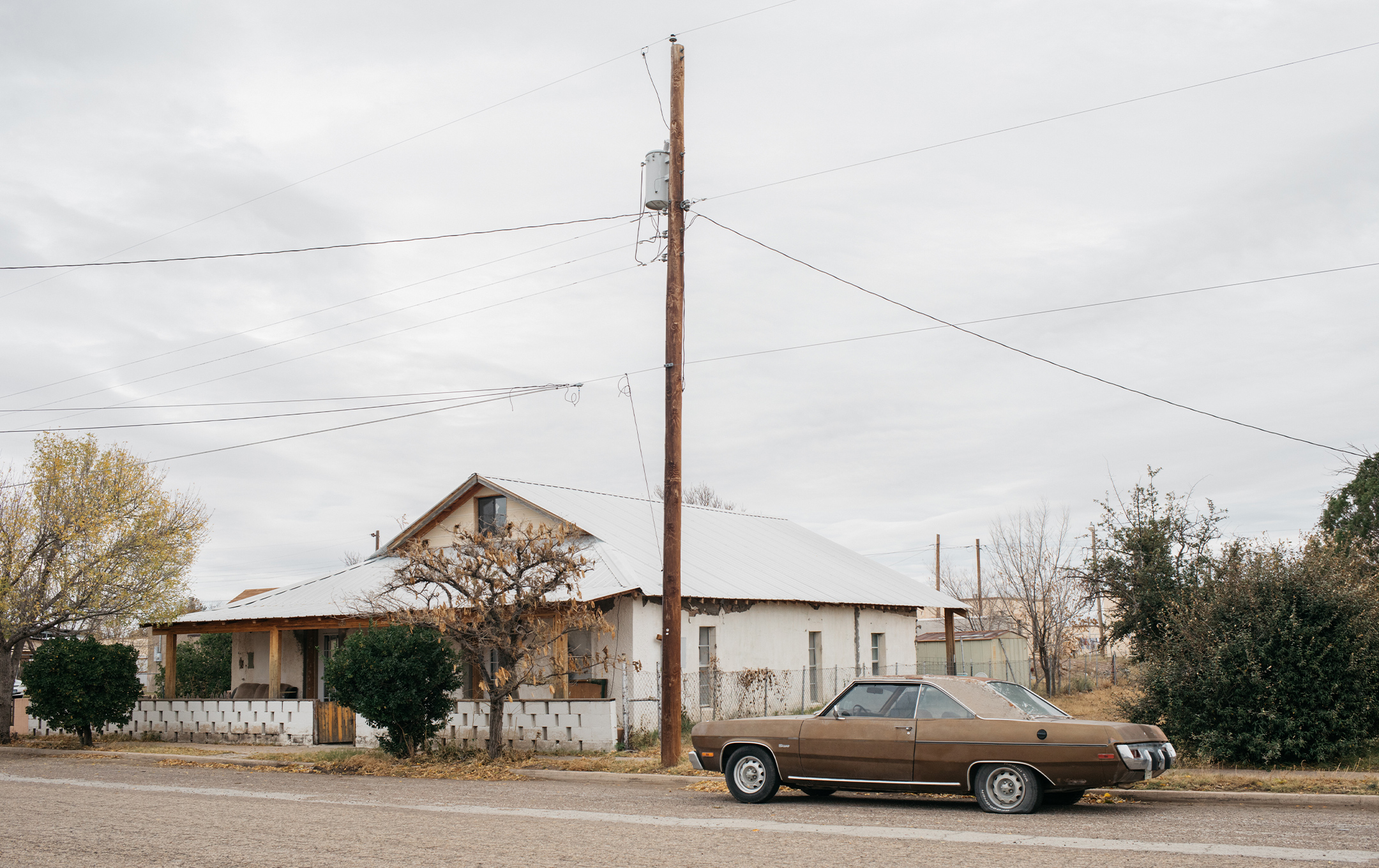 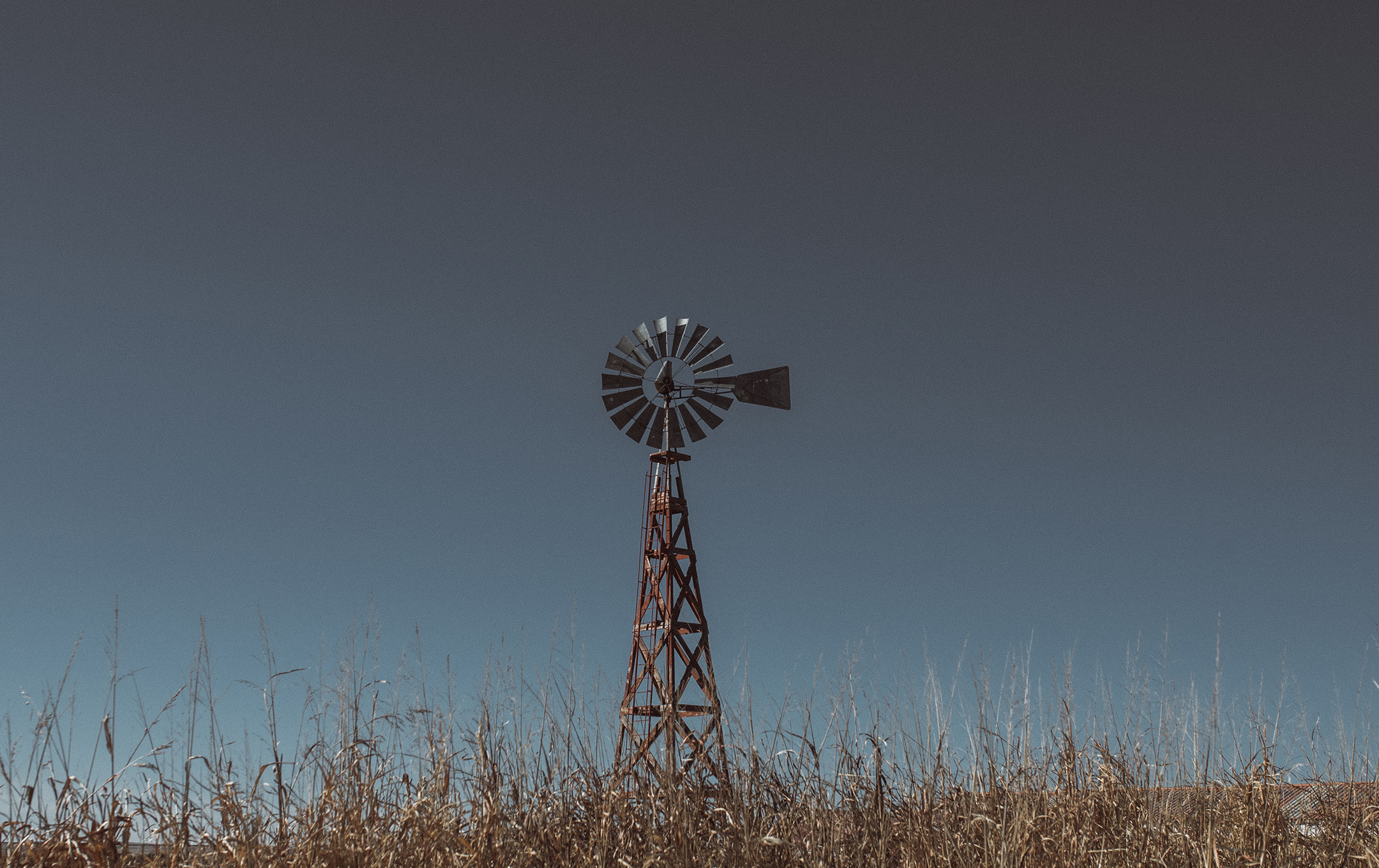 To create the “sound” room, Further residents Jeanann Dara and Jose Antonio Prat spent months living in Marfa, capturing video and audio material that immerses the viewer in “the macro and micro elements” of the desert landscape. In the “light” room, Puerto Rican multimedia artist Carlos Betancourt used illuminated Christmas tree toppers to create a series of sculptural and print works that seem to transform into magical vehicles of light—a meditation on ritual and childhood memories. “Objects can be embedded with memory,” said Betancourt, “and it’s the role of the artist to activate them.” The “chroma,” or “color” installation by Mexico City multimedia artist Erick Meyenberg explored the ecological threat of a border wall between the United States and Mexico, while “charcoal” room, by Guadalajaran visual artist Emanuel Tovar, contrasted coal and gold in abstract sculptural paintings that comment on the intersection of class, power, and consumerism in the mining industry.
‍

This connection to real social issues was important in a place like Marfa, which today is a study of contrasts—a sleepy rancher town peppered with world-class galleries, a cultural mecca in the middle of nowhere, a place where tourism and gentrification has led to drastic wealth divisions and where socioeconomic challenges are very real to the majority-Hispanic local population.
‍

“This is a community that's really struggling, where 69 percent of school children are on free or reduced lunch and we're struggling to even cover our basic school programs,” said Susan Kirr, vice president of the board of the Marfa Education Foundation, which supports the local school district and facilitates enrichment projects like arts and after-school programs. Marfa Education Foundation is one of three local nonprofits to which Further Marfa donated 30 percent of the proceeds from the artworks sold at The Basic. The other two are The Americas Foundation, which assists marginalized communities locally and across the Mexican border, and the Presidio International, the Spanish-language edition of the local newspaper, the Big Bend Sentinel.
‍

The Sentinel itself is a prime example of a local business that takes seriously its responsibility to Marfa’s fragile social ecosystem. Founded in 1926, it was purchased in 2019 by married couple Max Kabat and Maisie Crow. A branding entrepreneur and former hedge fund manager, Kabat took on the business side of the operation, while Crow, an award-winning documentary filmmaker, serves as editor in chief. They not only expanded the paper’s print and online coverage but opened up an all-day coffeeshop and restaurant, also called the Sentinel, which was one of the venues of Further Marfa.
‍

“There're a lot of conversation happening around what is the most sustainable way to make the town thrive,” said Kabat. “The question we asked was how might you evolve the idea of local, independent journalism? If a newspaper's utility is to provide information, what would it look like if we built a space around it where people exchange information? For us, it was important to think about what the community needed, not what we wanted to have.”  In this way, the Sentinel sits in a long line of people and projects that have tried in some way to enrich the cultural life of the community, to add to the rich social tapestry of this unique border town.
‍

“It's just original to its core,” said Martinez of Marfa. “People are so free here and you can smell it and you can feel it and you can even sense it happening to you. And it makes you question so many of your life decisions, you know? I think that’s it—that’s why we're here. That’s what we’re grasping. That’s what's happening as we speak.”

“There're a lot of conversation happening around what is the most sustainable way to make the town thrive.”